Wax in the ears is a common and easily treatable cause of deafness, discomfort, and sometimes ringing in your ears (tinnitus).

Ear wax is produced by all of us. It only causes problems when it builds up, which may be due to over-production or difficulties in the natural clearance of the wax. 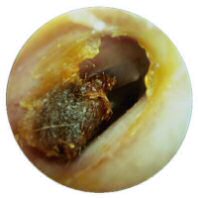 You may notice a build-up of wax by:

The skin cells lining our outer ear canals include tiny glands, similar to sweat glands, which produce wax. The point seems to be that this acts as a protective layer, which traps dust and other particles which get into the ear. The wax slowly works its way to the outside, taking the trapped dirt and dust with it.

Most people's ears clear the wax, which probably comes off on our pillows and towels etc., at a rate which means that it does not build up. Some people may, at some stages in their lives produce wax at a faster rate. Other people have either one or both ear canals that is narrow, or that is at an angle which slows the natural passage of the wax. In these people the wax builds up.

The wax may eventually block off the ear canal all together. If this happens, hearing is reduced, and there is an increased likelihood that stagnation may lead to an infection building up behind the obstruction.

An otoscope can be used to look into your ears for signs of excess ear wax. We all produce wax, what you are looking for is evidence of the wax actually blocking off the ear canal.

Deafness can be caused by other problems in the ear, and if there is not enough wax to explain your problem, a doctor will be able to discuss possible causes for your symptoms, eg fluid collecting on the other side of the ear drum when the tube which drains from the middle ear to the throat (the eustachian tube) has become blocked, as after a cold.

If you think you have ear wax blocking your ears, either buy some wax softening drops, from the pharmacy, or use a couple of drops of warmed (body temperature) olive oil into your ear two or three times a day, for a few days.

After three or four days arrange to see someone regarding having your ears washed out. The nurse at your doctor's office will usually be able to do this for you. You can also gentle swish your ears with warm water while showering from a nasal bulb syringe of the type that is often used for suctioning infants noses.

If you have ear pain, a temperature, or are otherwise concerned, you should speak to or see your doctor sooner.

If you know that you have a hole in your ear drum (a perforation), you should not put drops in your ear without having first discussed it with your doctor or a competent medical advisor.